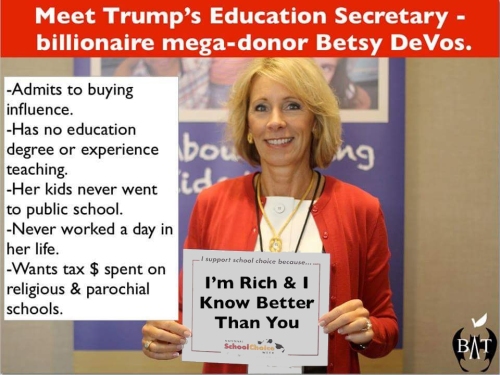 I often struggle with depression.  Every member of my family has battled it at some point.  And it is a dangerous disease.  It can kill you.  I don’t like spending quaking, fearful hours in the emergency room.  I have had to do exactly that three times already.  And now Trump has attacked my most cherished issue… public schools.  I gave my life to them for 31 years.  There is not enough chocolate in the house.

It is ironic.  I was already attempting to commit suicide by not taking my daily medication any more because of high drug prices that health insurance does not help with.  But that suicide attempt has actually failed already.  After two years of not taking blood pressure medication, a thing the doctor feared would kill me, I am now detoxified and actually feeling quite a lot better.  My blood pressure has not been high since 2001.

So, if I am compelled to end it all over the rise of Education Czar Betsy DeVos, I will have to use some of that creative problem-solving that we have not really been allowed to teach since the George W. Bush administration.  Something involving massive amounts of sugar water and thousands of man-eating butterflies would be appropriate, I think.

If I had to teach this class, I would be tempted to flunk the orange-skinned kid in the middle just on principle, but that would be discriminating against a rich guy, which is against everything this new administration stands for.

Privatizing schools, another way of saying the “school choice” thing that Republicans love to promote, will mean you get exactly what you pay for in education.  Unfortunately, that means you have to be rich to get proper schooling.  Since governmental entities will be shedding the burdens of paying for schools, the good schools will only be able to pay for their resources by charging high tuition and fees, something that limited school vouchers will never be able to fund.  A majority of kids whose families cannot afford anything more than the vouchers will pay for will end up in underfunded discipline mills that will be far worse than the public schools we have now.  Those schools will be set up to prepare students for their future employment making license plates in State prisons even more so than public schools are now.

My Republican friends in Texas (and my birth State of Iowa too, for that matter) like to tell me that, “You can’t solve education’s problems by throwing money at them.”  But I would like to know what studies they base that conclusion on.  When in American history have we thrown money at schools?  Other nations that get better education results do spend more, especially on paying teachers better.  And they are not forced to teach Creationism in Science class to get those funds.

So, managing depression has not been easy since the recent election.  Recount efforts and rumors that the Electoral College may do what they were designed for and vote for the candidate that actually won the popular vote are just pipe dreams, and won’t actually amount to anything.  Betsy DeVos will be the next Secretary of Education.  Maybe I will try bucket-loads of stinky, sharp cheddar cheese and a lighter for setting off explosive cheese farts.  It would be a painful way to go, but the results might also be colorfully amazing.

P.S. – I would never actually commit suicide, and as someone who has spent time in the ER fretting for someone else, I would never really advocate that.  But I am certainly not above using it as a bit of hyperbole to discuss important issues that I really do see as life-or-death.