It has been shown in a new study that there are actually more green leaves out there now as a result of industrial emissions of CO2.  The world is becoming greener.  This is not just Mickey telling stories.  You can find a corroborating article from the BBC Here!  So my war to keep my wife’s love of flowering plants from eating our house is not all in my head… mostly, but not ALL.

This rake-eating wisteria had climbed, entwined, and imprisoned one of our rakes. I rescued it from being eaten when the other rake broke during my endless battles with live oak leaves.

Texas weather in the month of May has been almost exclusively water from the sky.  It has rained more days than it has been sunny.   In fact, rainy days have been more than half the days in May.  This is a distinct change from the year-after-year drought pattern that we experienced every year we have lived in North Texas up until two years ago.

The ground under our house after shriveling up with drought for eight years is now swelling and moving with the flow of mud and clay.  That means the pool is cracked and unusable.  The foundation is also cracked and shifting.  If the plants don’t eat the house, the wet ground and the fracking earthquakes are going to knock it down. 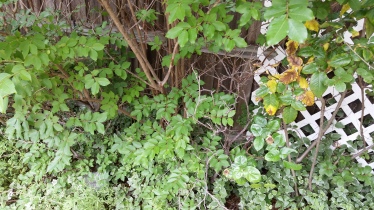 The greening of our world is not entirely a good thing.  It is true that plants turn the carbon dioxide into breathable air.  And flowers are wonderful, even though the pollen they produce often makes my COPD chest pains ache and makes it harder to draw breath.  But it is also evidence that the whole pollute-for-profit thing that industrialists do without conscience, is destroying our world and making it possible for the planet to pull down our structures and buildings with storms and erosion and earthquakes and general entropy.

Being an Iowa farm boy, I am in favor or the world being green.  Even though, as Kermit always sings to us, it ain’t easy being green, if we can do it properly, being green will make our lives better.  But we need to do it intentionally.  We should not simply rely on the good graces of industrialists who make higher profits from not having regulations about how much green-house gas they can pump into the atmosphere per hour.  Let’s see if we can make green a good thing.