The Magic of Pez

In 1927 in the mythical land of Austria, where they seem to know how to make candy… a condensed form of peppermint was created in a lozenge form and then placed into a plastic toy dispenser.  The spells that were cast to make this magical item probably had nothing to do with toad warts and bat wings and eye of newt.  It has more to do with Mickey Mouse, then Katzenjammer Kids, and Marvel Super Heroes.  I have been caught under the spells of a PEZ fixation since childhood.  I remember begging for a Bugs Bunny dispenser in Merle Hay Mall in Des Moines when I was probably six years old.  My parents wisely said no hundreds of times when I was a kid.  Who wanted to spend a nickel on a penny’s worth of candy?  Just for a Pez dispenser.  If they ever caved to my begging, even once, I don’t still have the dispenser.  But now I am supposedly a responsible adult.  I have money.  Well, I used to have money before I spent it on collecting PEZ dispensers.  I can’t even eat the the stupid candy.  I have diabetes.  So I feed the candy to my kids and risk giving them diabetes.

Here, my minion Stuart is showing off my Avengers collection.  It took him nearly thirty minutes to line these six dispensers up so that they were all standing at once.  The Hulk kept falling on him repeatedly.

I am proud of my Toy Story collection.  I had to go to some lengths to find some of these (particularly Slinky Dog and Rex). 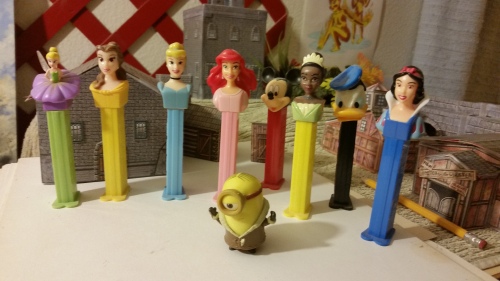 Disney Princesses were easy.  Both at Walmart and Toys R Us they were all grouped together on the Disney hooks.

The Muppets were also grouped together with the Disney Pez.

Winnie the Pooh is Disney, too.  I got some of these on discount at Toys R Us.  I still need Piglet and Owl… and Christopher Robin.  I don’t have an unbroken Minnie Mouse either.  I had small children when I first started collecting these, and now I have fat children and a lot of empty Pez dispensers. 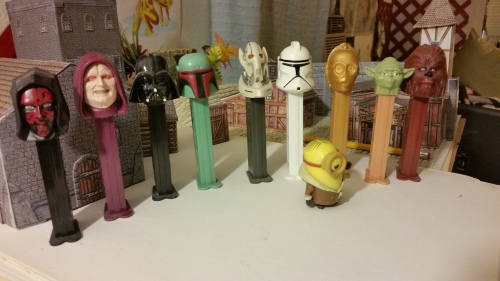 My Star Wars collection seems to be evil Pez dispensers and Yoda.

And poor Stuart is getting tired of standing up Pez dispensers, so I will end here without having shown you all of my PEZ dispensers.  Besides, I have reason to keep the newest dispensers a secret from my minion.

7 responses to “The Magic of Pez”