While visiting home in Iowa, I re-connected with an old family friend.  It was in the farmhouse upstairs bedroom where I was being quartered as a visitor.  It was an it, not a him… a book, not a man.  It was a very old book, published in 1938.

Yes, the Ittle Red H is a child’s picture-book.  Of course the first time I saw it, it was titled The Little Red Hen .  It was in much better shape then.  I was a beginning reader back then.  My mother and my two uncles were the first beginning readers who began reading this book.  It was in very good shape after it passed on to my generation at grandpa and grandma’s house.  Does that mean it was my fault that it got all child-chewed and doggedy-eared?  There was, after all, my cousins’ kids, and my cousins’ grandkids in between there looking at the book and possibly eating it too.

Members of my family learned valuable lessons from this old book.  We learned that you can tape pages back together as long as you retrieve the page-parts from the child’s mouth before they actually get swallowed and digested.  We also learned that a Red Hen can still bake bread even though the top of her head has been removed.

Alternating pages were printed in black and white and pink ink.  I can remember studying these pages for a long time and wondering why sometimes the duck and the goose were pink, and other times yellow, and other times black and white.  I think that may have taught me that color doesn’t matter… it’s the character of the character that can be recognized in spite of pink ink.  A very profound realization I do believe.

I also learned that ducks and geese are richer than chickens, as determined by the fine clothing and the fact that their noses are held high in the air.  Monocles in duck’s eyes mean that ducks are supposed to be smarter than chickens too.  Apparently if you are smart and rich, you don’t do any of the actual work, yet expect that you are going to get to eat the bread anyway when it it is baked. 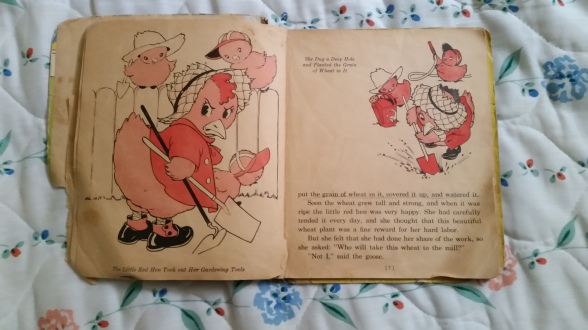 You can tell by the many tools and the grouchy face on the Red Hen that she is a chicken and expected to do all the work, even though she has kids to support and is the same pink color as the duck and goose sometimes appear.

When the Red Hen is in full color, she’s kinda brown in color.  That is certainly telling too.

I love the comical comics in the illustrations of this book.  I traced them and copied them many times in my misspent youth. 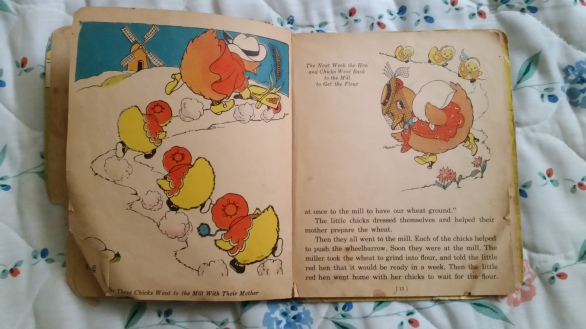 Perhaps I have blathered on a bit too much.  Maybe I should just shut up and show you the rest of this precious old book. 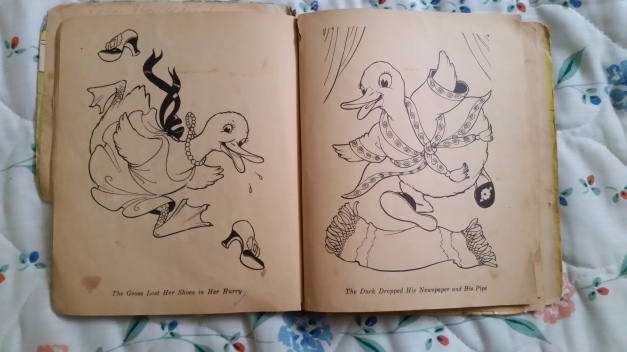 As I go back and edit and re-read, I am just guessing, but it may be easily apparent that I was watching the Marx Brothers in Duck Soup while writing this loopy post.  But it is, after all, mainly about using my meager photography skills to preserve this beloved old book. 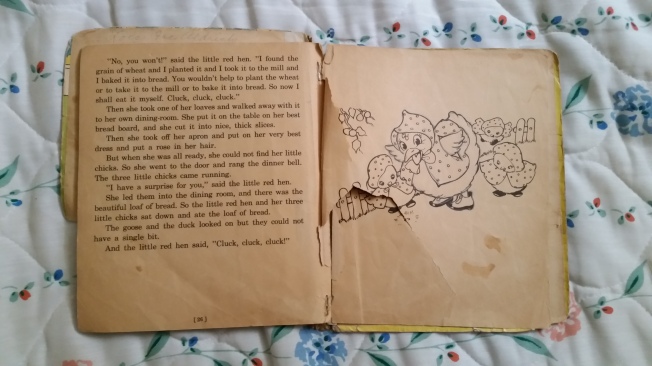 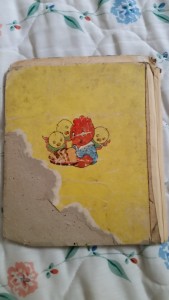