I have been working on the beginnings of the novel When the Captain Came Calling.  It is not the first draft.  It is the third entire re-write.  I wrote this as a graphic novel before graphic novels were an established form.  Then I tried to rewrite it as a traditional novel, and it is now coming into its YA novel form.  But I can’t begin to explain this novel-writing project without telling you about the Clarkes.  Yes, they are a very important Iowegian family who farm and are entirely fictional.  (Kids, what other words do you know that begin with the letter F?)  They are based, at least a tiny bit, on my own family when I was a kid, but very specific parts of it.  My Uncle Larry, mother’s older brother who is now gone (but never forgotten) was the inspiration for Dash Clarke.  Kyle Clarke, the father in the picture, is Dash’s younger brother… though he is not based on my other maternal uncle.  The daughter in the Paffooney picture, Valerie Clarke, is based on my own daughter combined with a girl I had a crush on in grade school and a girl who had a deeply felt crush on me when I was a young teacher.  The Clarkes are third generation farmers, just as my own family were back in the time this story is set.  Unlike my family, the Clarkes do not come out of the 80’s with their family farms intact.  What grandparents built, the sons lose hold of, and the world becomes a much sadder place because of it.  The story is about a lot of things in addition to a family losing their farm.  It is filled with magic, telling sea stories and other lies, and the truth behind both the magic  and the lies.

I posted this today because today is the day I finished the Paffooney illustration that started the post.  Here is what it looked like in progress; 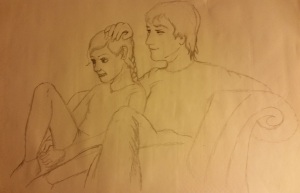 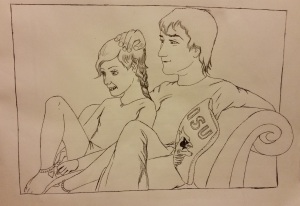 Paffooneys are a made-up thing by which I name the whole great glob of artwork and stories I have created that represent the never-ending music in my soul.  I am not a singer or a song-writer.  The only way these tunes come to life is through the toons which I ignorantly call the Paffoons because the loons have nothing on me.

Here is a cover mock-up for the novel which shows another picture of Valerie Clarke, the most beautiful little girl ever born in Norwall, Iowa (a phrase that her Uncle Dash christened her with when she was small, and it caught on with the entire town.) 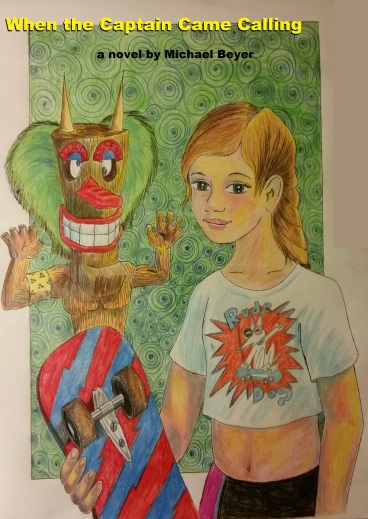